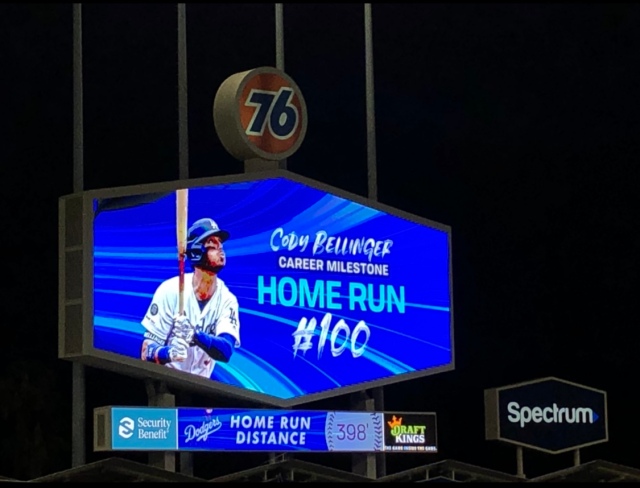 Since bursting onto the scene in 2017, Cody Bellinger quickly became my favorite player. His ability to play a Gold Glove caliber first base and right field are just one of his many tools. However, what he is most known for is his ability to hit baseballs really far. I’ve been fortunate enough to witness 10 of Bellinger’s Home Run’s in person and the most memorable was the 100th of his career.

In 2017, Cody Bellinger hit a whopping 39 Home Run’s in his rookie campaign and he showed the characteristics of a true power hitter. His upper cut swing lead to high arching Home Run’s that would make you smile from ear to ear. That year, Cody Bellinger participated in the Home Run Derby and did well but was eventually eliminated by the eventual champion, Aaron Judge. When it was all said and done, Cody Bellinger would end up being an All Star and the National League Rookie Of The Year.

When 2018 rolled around, everyone was ready to see more of Cody Bellinger’s majestic blasts. Unfortunately, Bellinger struggled much of the season and did not look like his 2017 self. Due to this, he ended 2018 with only 25 Home Run’s. This prompted many critics to ask whether 2017 Bellinger was just a fluke. It wasn’t a fluke, Bellinger just suffered from a bad sophomore season, as most players do.

Now, a year later, Cody Bellinger is currently the Dodgers best power hitter. Bellinger shares the Major League lead for Home Run’s at 36. His last Home Run was the 100th of his career. Bellinger is on pace to hit 50+ Homers this season and I have no doubt that he will be able to do so.

By the end of his career, I don’t think Bellinger will have some monstrous amount of Home Run’s. I do think that he will have somewhere in the 400-500 range. Then again, he has already hit 100 in just three seasons. So with that in mind, anything is possible for Cody Bellinger!