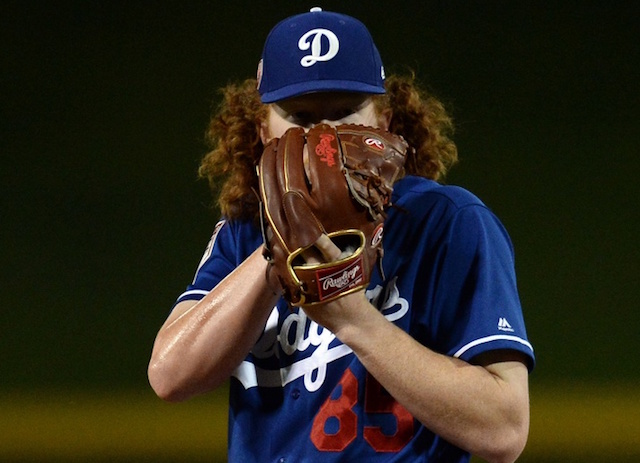 Dustin May, the Dodgers top pitching prospect, will be called up to make his major league debut against the San Diego Padres on Friday night. The young fireballer, just 21 years of age, has quickly progressed through the Dodgers minor league system and is poised to be the next ace of the Dodgers staff.

Many refer to May as “Ginger Thor” as he has fire like red hair and has stuff comparable to Noah Syndegaard of the New York Mets. So maybe the Dodgers did wind up getting a stud pitcher at the trade deadline, just not from outside the organization.

While spending time in the minor leagues, Dustin May has been named a 2 time Mid Season All Star for both the Great Lakes Loons in 2017 and the Tulsa Drillers in 2019. Additionally, May was selected to pitch in the 2019 Futures game in Cleveland, Ohio.

There is no further information about May regarding the Dodgers plan for him. We do know that they will have him on a pitch count and an inning limit, whichever comes first for him. One thing is for sure, you do not want to miss this performance.

Today has been a wild day dealing with trades and other information. First of all, the Los Angeles Dodgers won the series finale against the Colorado Rockies by a score of 5-1. We got to witness the Dodgers post trade deadline bullpen in action. We saw Pedro Baez, Joe Kelly, JT Chargois and Kenley Jansen appear in that order.

Both Kelly and Jansen, the pitchers that everyone are very concerned about, were flawless. They looked dominant and possibly more confident now that they know they are being trusted?

Either way, the Dodgers pulled out the victory after rookie Catcher, Will Smith, and newly acquired super utility man, Kristopher Negrón, were able to homer in the top of the ninth inning. The Dodgers head home to open a 4 game series with the San Diego Padres tomorrow night.