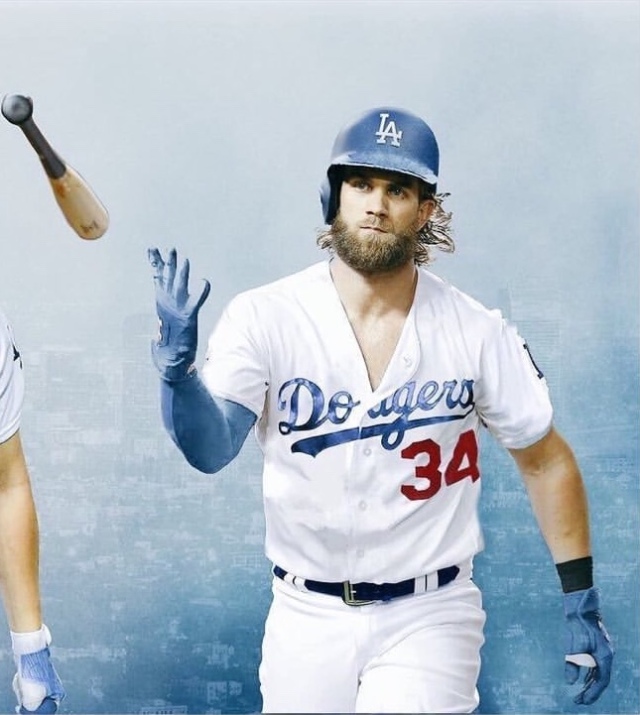 Close your eyes, picture this scene in your head. It’s Opening Day, 2019, the starting lineup is being announced. As they get to the third spot in the order, you hear “playing right field, number 34, Bryce Harper”. Imagine the audience roaring as loud as the last time the Dodgers won the World Series. Finally, the Los Angeles Dodgers are back and finally, the Dodgers have a superstar player!

Anyone that says they wouldn’t want Bryce Harper on their team is in denial. Bryce Harper is not just an average baseball player. He is the epitome of a generational talent. Harper has been on ESPN since he was 16 and was playing Major League Baseball by the time he was 19. In the seven years since Harper has been in the league, he has already accomplished a list of accolades. He has been a Rookie Of the Year, an MVP and a 6-time all star. Not to mention, Bryce Harper currently has 184 Home Run’s under his belt.

There are loads of Dodger “fans” and fans of other baseball teams interested in Harper that say he is a waste of time and money. I disagree with all of these sentiments. Sure he has been inconsistent at times but who else hasn’t been?(Excluding Mike Trout). We are talking about a player that is only 26 years old and seven years into his playing career. Bryce Harper easily has a solid six or seven years left of playing elite baseball. After that period is over, then we can judge how “inconsistent” or “troublesome” he is. Until then however, we as Dodger fans or fans of baseball need to embrace just how good this kid is.

This past week since the Winter Meetings, there has been constant rumbling of rumors involving Bryce Harper and Manny Machado. Machado has met with the Chicago White Sox and is scheduled to meet with the New York Yankees and Philadelphia Phillies later this week. Anyways, there has yet to be any official statements by Harper or his agent Scott Boras. Although there has been an article published in the past week claiming that the Dodgers and Harper have reached an agreement on a contract.

In regards to that article, I don’t trust it. If the information or rumor was true, all of the baseball insiders and analysts over at MLB Network would be going insane. Not to mention, this post I’m currently writing would have a totally different tone to it. As crazy as it sounds, with all bias aside, I can see this rumor being true. Apparently the mysterious “insider” that leaked this information was the same person that said Jansen and Turner were resigning with the Dodgers before anything had become public or official. With that being said, take this rumor with a grain of salt.

As cheap as the Dodgers have been with President of Baseball Ops and somewhat General Manager, they’ve said that they do not want to offer Harper a long term, record breaking deal. I don’t think they’ll reverse this statement but I also don’t think that this takes them out of the Harper sweepstakes.

All of us as baseball fans have come to this conclusion that the minimum contract for Harper is 10 years at $40 million a year. What if this expectation that most of the baseball fan base has, is incorrect? Sure, Harper wants to be the highest paid and there’s no doubt in my mind that he will be. However, I think he can still be the highest paid player ever without having an insanely long term contract.

In my opinion, I can see the Dodgers offering Bryce Harper and 6-8 year contract at roughly $38-$42 million per year. With that being said, I think the only way the Dodgers can secure and convince Harper with this contract is to: pay him the highest amount possible for the first couple of seasons and have multiple opt out clauses. In this situation, if the Dodgers pay Harper a hefty $40-42 million for the first two seasons, he will no doubt be the highest paid player ever in terms of AAV. After those first two seasons, pay him $38-$40 million for the next two seasons with an opt out clause after the third and fourth season. Finally, pay Harper $36-$38 million for the next three seasons with an opt out after the seventh season.

I know nothing about contracts and the technicalities but it is fun to just play around and brainstorm possibilities. Just for the fun of it, let’s break down this hypothetical contract:

With all of that totaled together, the Dodgers contract for Bryce Harper would come out to 8 years, $317,500,000. WOW, talk about getting paid. Of course, this is just myself throwing insane numbers out there but it is possible to make Harper the highest paid player. I put opt out clauses every other year just to make it seem like Harper would get the highest AAV and to make it so that he will be a potential free agent again at the age of 30. These numbers are extremely generous and the contract is more than the one offered by the Nationals (10 years, $300 million) but, like I said, I’m just having fun with this whole situation.

All in all, I don’t think Bryce Harper will sign a new contract before the end of this year. Possibly early to mid January.

I will end this by saying that Los Angeles needs Bryce Harper and Bryce Harper needs Los Angeles. He is the Lebron James of baseball. His superstar swag and appearance embodies the Hollywood lifestyle. The fans say they don’t want you but, they’ll be saying sorry on Opening Day when you hit your first Home Run as a Dodger!