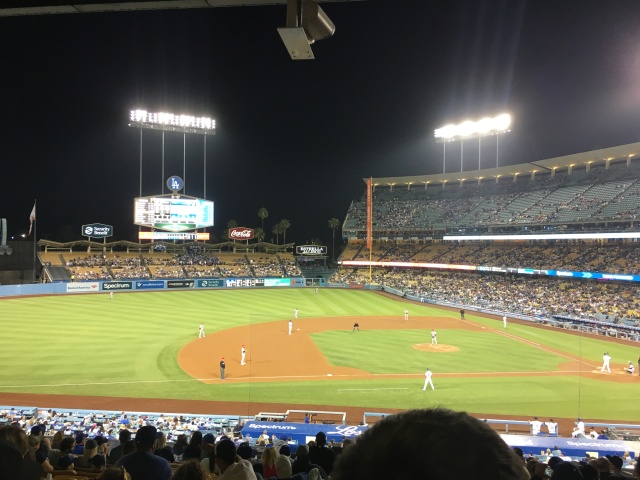 It is a hot Summer day and the Dodgers are representing this weather perfectly. They are HOT!

I told you in my previous post that the Pirates were a miserable team but I had no clue they could be this miserable. Wow, the Dodgers scored seventeen runs the first game, eight the next game and then six in the series finale! All I have to say is, those poor pitchers. They were dead before the game started. I don’t think I can do a full breakdown about each game as so many runs were scored but I’ll try to summarize the series as best as possible.

On Monday night, the Dodgers scored a season high seventeen runs and a season high twenty-one hits. Cody Bellinger, Max Muncy, Joc Pederson and Matt Kemp all homered. Yasiel Puig went three for five with four RBI’s. This game was over by the fifth inning if we’re being honest. The Pittsburgh Pirates practically gave up and accepted what was happening. The true highlight of the night was Matt Kemp. Monday night might have been one of Matt Kemp’s best games so far this season. Kemp had a career high five hits, four RBI’s and four runs scored. I mean, what couldn’t Matt Kemp do? That performance only boosted his chances of starting in the All-Star Game. Man, at the start of Spring Training, who would’ve realistically thought that Matt Kemp would have this kind of a season? You all know I didn’t have the highest hopes for him but now I do! I want Matt Kemp to continue this amazing season and maybe get some MVP votes when the season ends. I know he won’t win the award but it would be cool to see his name on the list again.

Tuesday night’s game was started by Clayton Kershaw and wouldn’t you know, he finally got a win! It seems like forever since Kershaw got a win and that’s because it has been forever. Between his two stints on the Disabled List this season and having pitched poorly in certain games, it’s amazing to see Kershaw on the right track. Also, let’s not forget the games that Kershaw pitched great in but the bullpen came in to blow. This season is definitely an off year for Kershaw but I don’t think he will hold this against the Dodgers. Kershaw is a loyal player and won’t go to the highest bidder unlike NBA players.

Along with Clayton Kershaw picking up the win, it wasn’t just him that contributed. In fact, five players on the Dodgers contributed by hitting Home Run’s. For the second night in a row Joc Pederson and Max Muncy hit Home Run’s. Not to mention, the two went Back-To-Back in the first inning. Then, Muncy hit ANOTHER Solo Home Run. Muncy now has twenty Home Run’s and has done it quicker than any previous Dodger, including Cody Bellinger. In addition to Muncy and Pederson’s Home Run’s, Chris Taylor, Kiké Hernandez and Yasmani Grandal also hit bombs of their own. The game was won on Home Run’s and nothing more.

The final game of the series fell on the Fourth of July, the perfect day for baseball. There were no “Fireworks”(Home Run’s) for the Dodgers but they did manage to win the game by getting timely hits. Rich Hill pitched and lasted five innings while allowing four hits, two earned runs, one walk and five strikeouts. The other two runs the Pirates scored would come off of reliever Edward Paredes. After Paredes, Kenley Jansen came into the game for a partial two inning save. The save would be Jansen’s twenty-third of the year. With the win on Wednesday night, the Dodgers moved up to a half game out of first place. During the off day on Thursday, the Diamondbacks lost and therefore the Dodgers moved up half a game. Hello first place!

The Dodgers begin the Freeway Series tonight with the “Los Angeles” Angels of Anaheim. Boy have the Angels tanked. They haven’t necessarily tanked as far as the Mets, but they’re slowly getting to that point. They’re in fourth place in the AL West and the only thing keeping them there are the disastrous Texas Rangers. The Astros, Mariners and Oakland A’s are too much for the struggling Angels. Nonetheless, the Angels still have Mike Trout and they’re the luckiest team in baseball. The Dodgers are riding a four game win streak and look to Kenta Maeda to keep it going!