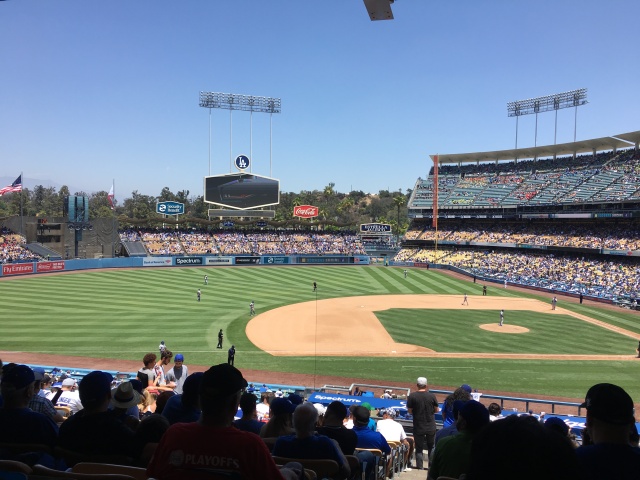 Hello everyone, I am back. I didn’t go anywhere, I just got real lazy the past two weeks. June is a hectic month for my family but that shouldn’t be a reason to not post and keep my readers entertained or informed. Anyways, I’m back and I’ve got a lot to talk about!

Since the last time I posted, the Dodgers have continued their hot streak of hitting Home Run’s and mowing through opponents. The Dodgers won two of the three games against San Francisco, only won once in Chicago against the Cubs but then came back to sweep the Mets. And if we’re being honest, sweeping the Mets shouldn’t be that hard with the way that team is performing. Nonetheless, it’s a great pick me up for the Dodgers who had just lost two games in a row to the Cubs.

After sweeping the Mets, the Dodgers came home to Los Angeles to face the Chicago Cubs…again. Out of the four games, each team split the series by winning two games. Both teams alternated wins each night.

The Dodgers won Monday night’s game by a score of 2-1. Kenta Maeda returned back to his great season by firing seven shutout innings and striking out NINE batters! Kiké Hernandez continued his offensive tear by crushing a Solo Home Run which put the Dodgers on the board early. Later on in the game, Chris Taylor, who has been dealing with a tight hamstring, came up to pinch hit and crushed a Solo Home Run of his own! That insurance run would be much appreciated as Kenley Jansen would give up a run in the Top of the ninth inning on a Sacrifice Fly. However, the Dodgers would win 2-1. Maeda gets the Win and Jansen picked up his twentieth save of the year.

The Cubs would flip the script on Tuesday night and demolish the Dodgers. Final score on Tuesday night was 9-4, with Javier Baez hitting two Home Run’s, including a Grand Slam. Javier Baez is equivalent to Jose Altuve. They’re both overly arrogant and cocky players who get under your skin. The worst part is that they’re good players!

Ross Stripling started the game on Tuesday night and was his usual self. His only mistake was a Solo Home Run given up to Baez. It wasn’t until the bullpen came into the game where things quickly got out of hand. Yimi Garcia and Edward Paredes were each charged with three runs. Daniel Hudson contributed to that by getting charged with two runs. That’s EIGHT runs given up by the wonderful “moneyball” bullpen folks! Dodgers lose, 9-4.

Wednesday night happened to be a somewhat Home Run Derby, as it’s been all month long for the Dodgers. Alex Wood gave up a 2-Run Home Run to Willson Contreras in the first inning and immediately you’re thinking, “Oh great, a repeat of last night’s game”. Until Max Muncy came up in the bottom of the first inning and homered for his 16th of the year! Muncy’s solo shot cut the Cubs lead to just one run. Shortly after, Grandal doubled to bring home two runners and give the Dodgers a 3-2 lead.

In the bottom half of the third inning, Joc Pederson crushed a 2-Run Home Run to right field. After Joc’s Home Run, Kiké singled to score Max Muncy. Now the Dodgers were leading 6-2 and things were looking just fine. The Cubs looked like they were going to comeback as they scored a run in the fifth inning and then another two runs in the eighth, luckily Cody Bellinger homered in the bottom of the eighth inning to extend the Dodgers lead to 7-5. Which would eventually be the final score. Alex Wood got the win and Kenley Jansen got his 21st save of the year.

The series finale yesterday was a disaster. The game was a disaster before it even started! With a 12:10 start time and living in Riverside (about an hour away), I thought I’d leave around 10 am. BOY was I wrong! I should’ve left at 6 in the morning to beat traffic. I fought traffic for about 3 hours before getting to Dodger Stadium. By the time I got into the stadium, the game had already started!

Clayton Kershaw made his second start since coming off the Disabled List and was just like any other Kershaw start. Five innings, five strikeouts and only one run allowed. That run came from an Addison Russell single that brought home Javier Baez. On the other side, the Dodgers continued to hit Home Run’s as Max Muncy hit ANOTHER Home Run. His seventeenth of the season which is a career high and also the team lead for the Dodgers. Not only that, Muncy is only two Home Run’s away from being tied with Bryce Harper for the National League lead.

Along with Muncy’s Home Run, Justin Turner hit a 2-Run Home Run in the bottom of the ninth inning, but the deficit was too large to overcome. After Clayton Kershaw left the game in the sixth inning, the game just spiraled out of control for the Dodgers. Walker Buehler, who had just been activated from the DL that morning, came out of the bullpen and quickly got lit up. Buehler gave up five runs on five hits and I can’t believe the Dodgers did this to him. He hadn’t thrown a rehab game or even a bullpen session yet they stick him in the game to face one of the best teams in baseball. It makes no sense whatsoever. Oh well, I left the game before the Cubs scored the majority of all of their runs in the game. Also, glad I did. Also x2, glad I didn’t because it was nothing but bumper to bumper traffic coming home. Like I said, yesterday was a complete disaster.

This month of June, the Dodgers have hit 53 Home Run’s!! The main contributors are Joc Pederson and Max Muncy. Although it seems like every hitter has hit one at least once this month. The Dodgers tied their club record with the 53rd Home Run in the month of June yesterday, that record was set last year when the Dodgers went on to be National League Champions.

Stay tuned for my next post when I talk about the aftermath of the upcoming series against the Colorado Rockies, Matt Kemp’s All Star chances and upcoming games to watch out for! Let’s Go Dodgers!