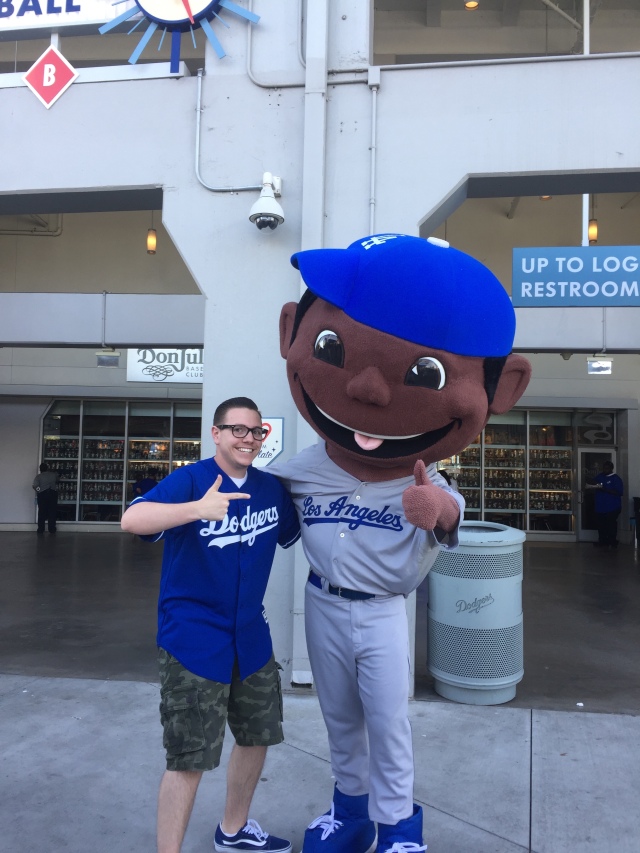 On Tuesday night, I was lucky enough to be on the club level prior to the game and I saw some Dodger greats! Tommy Lasorda, Don Newcombe and Fernando Valenzuela.

This week’s games were exciting and good instead of a blowout. Though the Dodgers lost the first game against Arizona, it was a well fought battle by both teams. The Dodgers would win the second game and split the series for the second week in a row. Last week, the Dodgers lost the first two games to Arizona and then came back to win the last two. Now 16-20 on the year, the Dodgers won’t have to play the Diamondbacks until the end of August. By then, both of these teams will be extremely different…hopefully.

As I said in my most recent post, I attended both games this week against Arizona. Tuesday night was highlighted by the return of Rich Hill and a lot of Home Runs from both teams. In addition to that, the game went to the twelfth inning.

Rich Hill was his usual shaky self. You never know what kind of performance you’re going to get of him. Hill only pitched four innings on Tuesday night. He was charged with five earned runs, all of which came from the long ball. In the first inning, the hot hitting Aj Pollock cracked his eleventh Home Run of the season, a 2-Run shot to put the Diamondbacks ahead, 2-0. Then in the third inning, Chris Owings hit a Solo Home Run of his own. Finally, in the fourth inning, Rich Hill allowed another 2-Run Home Run. This time to catcher John Ryan Murphy. A Home Run that Hill would have liked to take back if he could.

Now, the Dodgers did some scoring for themselves as well. They kept in the game for the entire way through. During the bottom of the first, Matt Kemp singled to bring in Chris Taylor. The score would stay 2-1 until Owing’s Solo shot that made it 3-1. Then, catcher Yasmani Grandal homered on a ball to right field. Let me tell you, that ball was SMOKED. This cut the Diamondbacks lead to just one run. That is until Murphy hit that 2-Run Home Run in the top of the fourth inning. The Diamondbacks had just added some cushion on their lead.

With the score 5-2, this game started to look like it was going to get out of control. But WAIT, there’s more! The Dodgers flaunted some of their 2017 character and started to mount a comeback. In the fifth inning, Yasmani Grandal singled and brought in rookie, Tim Locastro. The score was now 5-3. Following Grandal’s single, reigning Rookie Of The Year, Cody Bellinger doubled to right field and brought in Alex Verdugo. The Dodgers had gotten within striking distance of the Diamondbacks. Then in the bottom of the ninth, when more than half of the stadium had packed up and left, the showstopper, Kiké Hernandez came up to the plate against Arizona closer, Brad Boxberger. Hernandez came through big time with a Solo Home Run to straight away center field to tie the game! Dodger Stadium erupted and the place went wild. I myself lost my voice from cheering at the top of my lungs.

Sadly, after two innings of having runners in scoring position, the Dodgers could not capitalize and it made everyone frustrated. Instead of getting on base, the Dodgers are trying to have a Hollywood moment and hit a WalkOff Home Run. A simple Sacrifice Fly would’ve won the game but oh well. The Arizona Diamondbacks took full of advantage of the situation when Daniel Descalso came up with two runners on base. Descalso hit a 3-Run Home Run in the top of the twelfth inning to take the lead, 8-5. This would be the final score as the Dodgers couldn’t mount a comeback in the bottom of the inning.

Everyone came out on Wednesday night for Justin Turner’s WalkOff Bobblehead and it was a great time. Justin Turner was there at the stadium and caught the ceremonial first pitch. Turner, who has been sidelined since Spring Training with a fractured wrist, received a standing ovation! Also, Justin Turner is projected to make his 2018 debut next week in Washington as the Dodgers take on the Nationals. Hopefully this pans out and he’s 100% healthy. 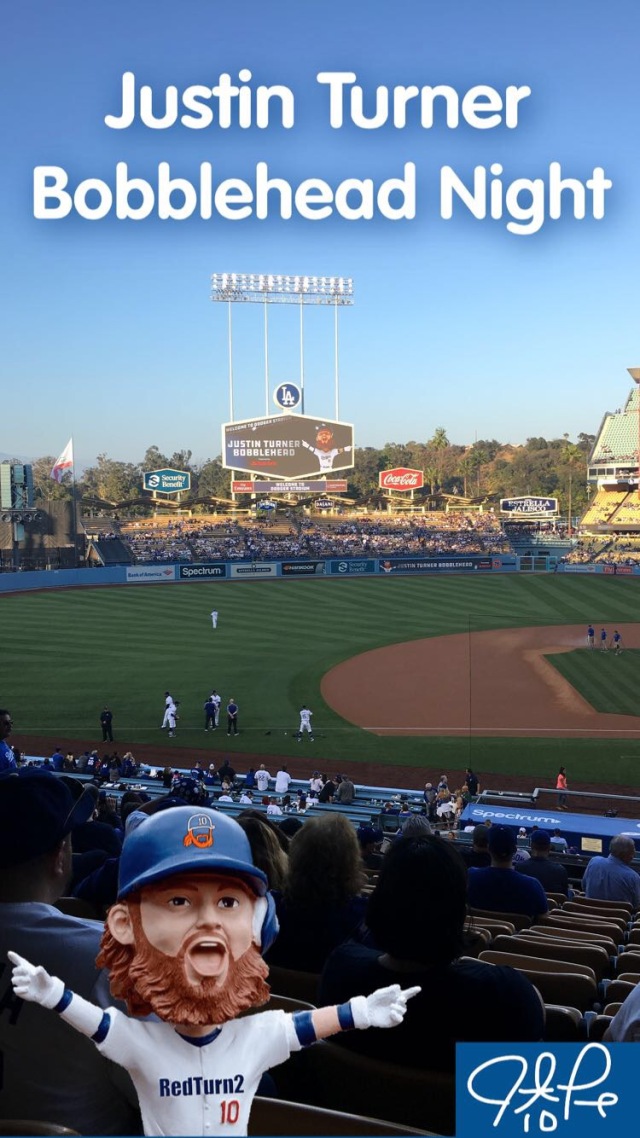 Alex Wood started the game on Wednesday night and was greeted with some trouble in the first inning. After getting the first batter, Chris Owings, out on a pop up, Nick Ahmed would come up and hit a Solo Home Run. However, the Home Run wasn’t like a normal one, it was an inside the park Home Run. Next to a triple, this is one of the most exciting plays to see in baseball. Anyways, the ball came flying towards center field and Kiké Hernandez came crashing into the wall with the ball bouncing right off the wall next to him. By the time the ball got to the cutoff man, Ahmed was already rounding third base.

The score would stay 1-0 until the bottom of the fourth inning. The Dodgers had bases loaded and Patrick Corbin threw a wild pitch which Chris Taylor capitalized on. Taylor came in to tie the game. Corbin wasn’t his usual dominant self, he only lasted five innings and walked four batters, but he did strike out seven batters.

Here come the Dodgers storming back to take the lead. In the bottom of the sixth inning, the Dodgers had bases loaded and Kyle Farmer finally took advantage and hit a Sacrifice Fly to score Yasmani Grandal. Dodgers take the lead, 2-1. Two batters later, Chris Taylor would get hit by the pitch, forcing home another run. After that, another wild pitch would be thrown and Yasiel Puig came into to score. Puig, by the way, came off the Disabled List Wednesday night and went 3 for 4 with three singles. Dodgers lead 4-1 at the end of six innings.

We’ve seen the Dodgers have a good lead before and then the bullpen comes in to blow it. That almost happened when the Diamondbacks instantly put up a fight in the top of the seventh inning. “Dodger Killer” Daniel Descalso came up to bat and doubled off of JT Chargois. Then a wild pitch sent him to third base. Fast forward two batters, Paul Goldschmidt singled on a fly ball that should’ve been caught but no one called for it. On that same play, Descalso came into the game to score. Dodgers still lead 2-4. Then Aj Pollock came up to bat and grounded out but hit the ball hard enough to score Nick Ahmed from third base. Dave Roberts had seen enough and brought in recently recalled, Scott Alexander. Alexander got Ketel Marte to ground out and end the inning. Dodgers barely holding onto a 3-4 lead.

The game would remain quiet until the bottom of the eighth inning. After Austin Barnes walked, Puig came up and singled. With two on, Kyle Farmer struck out. Then the veteran Chase Utley came up to pinch hit for Alexander. Utley ripped a double to center that would score Barnes and Puig. This would prove to be enough cushion for the Dodgers.

At the start of the ninth inning, “California Love” started playing and everyone already knew what that meant. One of the best closers in the game, Kenley Jansen would be coming in to shut the door on the Diamondbacks. Jansen did exactly that and didn’t allow a single baserunner. Jansen recorded his sixth save of the season and the Dodgers won their sixteenth game of the year.

The Los Angeles Dodgers welcome the Cincinnati Reds this weekend. They will have already played one game by the time this post is uploaded but let’s see if they can extend their win streak. Sweeping the Reds would be a major confidence boost for this ball club. The starters for this weekend are: Kenta Maeda, Ross Stripling and Rich Hill. Walker Buehler will have started on Thursday night but I’m writing this prior to the game.